From the Houston Chronicle

Nearly 20 years after Vaughan’s death in a helicopter crash on Aug. 27, 1990, he is being celebrated with today’s release of the band’s remastered and expanded second album, Couldn’t Stand the Weather: Legacy Edition (Epic/Legacy).

Shannon, the band’s bassist, recalled the genius of the legendary blues guitarist.

“The music took us, as much as us taking the music forward,” he said from his Austin home. “It came natural.”

Read the full story at https://www.chron.com

Blues Week rolls on at MusicRadar. In addition to all of our amazing contentwhich you can find right here, we now bring you an in-depth discussion with two of the people who knew the late Stevie Ray Vaughan better than anybody, his blues brothers Chris Layton and Tommy Shannon, the rhythm section that was Double Trouble.

When Stevie Ray Vaughan and Double Trouble entered New York City’s Power Station studios in January 1984 to record their second album, Couldn’t Stand The Weather, they knew the pressure was on.

“We were being looked at very closely,” remembers bassist Shannon. “Texas Flood went Gold, which shocked everybody. Here this little blues trio out of Austin comes along and makes good – nobody could believe it. So we had to outdo that album and prove that we weren’t some fluke. We had no idea that we’d make what people nowadays are calling a classic.”

Read the full article at MusicRadar.com

The Couldn’t Stand The Weather Legacy Edition will be in-stores tomorrow, but you can listen to the first disc, including all the Bonus Tracks, before you buy it right now on AOL’s Spinner

In case you missed it, SRV was on the cover of the May issue of Guitar World. Take a look. 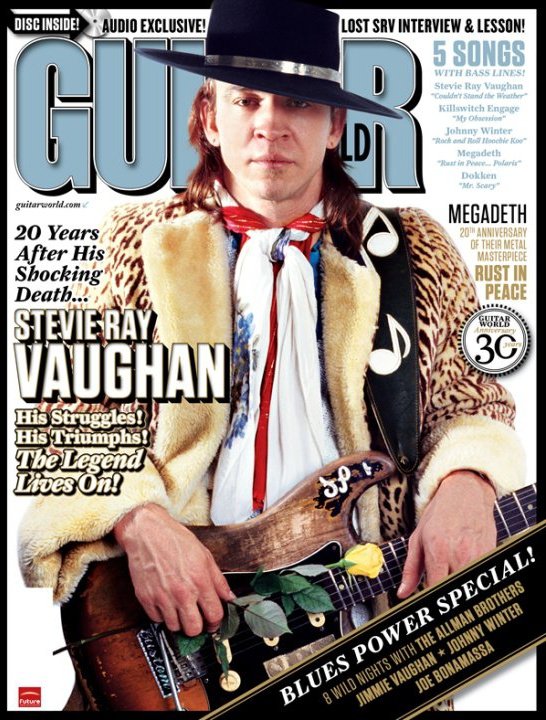 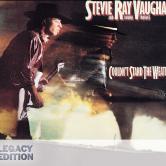 “There’s not a lot of people that you hear demos or bootlegs and you think ‘Wow, this guy figured it out even before he walked out of his house’… I’ll be 50 and still discovering something about Stevie Ray Vaughan’s music”

COULDN’T STAND THE WEATHER: LEGACY EDITION commemorates the 20th anniversary year of the passing of legendary guitarist Stevie Ray Vaughan. It revisits the commercial breakthrough of the second album by Stevie Ray Vaughan and Double Trouble. Released in May of 1984, it was their first LP to earn RIAA gold certification, and their first platinum-seller as well.

The first entry by Stevie Ray Vaughan and Double Trouble in the prestigious Legacy Edition series of multi-disc packages, COULDN’T STAND THE WEATHER: LEGACY EDITION will be available as a two-CD set at all physical and digital retail outlets starting July 27th through Epic/Legacy, a division of SONY MUSIC ENTERTAINMENT.

The recently-launched SRVOfficial.com is now the #1 destination for news and merchandise related to Stevie Ray Vaughan. The site also features exclusive video content, a photo gallery, fan forum, and information on new and forthcoming catalog releases from Stevie Ray Vaughan and Double Trouble through Epic/Legacy.

Individually, the two discs of COULDN’T STAND THE WEATHER: LEGACY EDITION will comprise:

“Disc one restores the original eight-song, 38-minute album with “Cold Shot” (a Top 30 Modern Rock track), indelible covers of blues standards including “Tin Pan Alley (aka Roughest Place In Town)” and Guitar Slim’s “The Things (That) I Used to Do” and, most notably, Hendrix’s “Voodoo Child (Slight Return)” (also a Top 30 Modern Rock track and a Grammy®-nominated performance); the sequence expands with another 11 studio outtakes from the original recording sessions in January 1984, three of them previously unreleased;

“Disc two premieres a previously unreleased live concert captured three month’s after the original LP’s release, from August 17, 1984, at The Spectrum in Montreal, Canada. The band played two sets that night and this disc captures selections from the late show. Featured are a mix of songs from the just-released Couldn’t Stand the Weather (among them “Voodoo Child (Slight Return)”), plus tunes from the 1983 Texas Flood debut.

As with every title in the Legacy Edition series, the booklet contains a comprehensive liner notes essay written by an acknowledged expert. Andy Aledort, associate editor of Guitar World magazine, is a blues-rock maven and accomplished guitarist in his own right. He has authored more than a dozen guitar instruction books on trailblazers like Hendrix, Van Halen, Joe Satriani, Jeff Healey and others; and annotated CDs on Buddy Guy, Johnny Winter, Dickey Betts and more. Aledort has been covering Stevie Ray’s career since his arrival at Epic Records in the summer of 1983, and has written liner notes for several of his Epic/Legacy releases, including the four-disc box set SRV (2000); The Essential Stevie Ray Vaughan (2002); The Real Deal: Greatest Hits, Vol. 1 (2006); and Solos, Sessions & Encores (2007).

Aledort’s 2,700-word essay sets the stage: “Though a mere six months had passed between the release of Texas Flood [SRV&DT’s Epic debut in 1983] and the start of the Couldn’t Stand the Weather recording sessions,” Aledort writes, “a great deal changed for the band, professionally and personally, in that short period. Couldn’t Stand the Weather represented the first time the band had a recording budget, but with it came record company pressures that had been absent previously. In addition, as the pace of the band members’ careers increased, so did the level of partying and drug use.”

As history goes, Texas Flood was recorded in two days in Los Angeles, with production supervised by recording engineer Richard Mullen (a Texas friend who worked on virtually every SRV&DT studio and live session through 1989). Hammond, the executive producer was not present. But when the sessions moved to New York in January for the second album, the band had the distinction of working in the studio with Hammond, on his last major commercial album production prior to his death in 1987.

The bonus track studio outtakes on disc one add a new perspective to the band’s chronology at this early stage, starting with Stevie’s original, “Empty Arms,” one of several tracks here from the first posthumous SRV collection, 1991’s Grammy Award-winning The Sky Is Crying. Hank Ballard & the Midnighters’ “Look At Little Sister” and New Orleans blues man Earl King’s standard “Come On” (covered by Hendrix on Electric Ladyland) showed up in different versions on SRV&DT’s next album, 1985’s Soul To Soul. They had performed Freddie King’s “Hide Away” and Hound Dog Taylor’s “Give Me Back My Wig” at shows (cf. Live At Montreux 1982 & 1985), but neither song would ever show up on one of their albums during Stevie Ray’s lifetime.

The previously unreleased versions here of “Boot Hill” and Elmore James’ “The Sky Is Crying” are different than those heard on The Sky Is Crying. In addition to “Empty Arms,” that album contained a number of tracks from the January 1984 sessions, including covers of Lonnie Mack’s “Wham!,” Hendrix’s “Little Wing” and Willie Dixon’s “Close To You.” Disc one comes to a close with a previously unreleased alternate take of the short instrumental, “Stang’s Swang” – compare it to the version that closes the original Couldn’t Stand The Weather album and it’s evident this version strips away the saxophone.

In August 1984, SRV&DT headlined Montreal’s Spectrum arena, where they performed an early and a late set, the latter chronicled on disc two here. They reprised a number of songs from the well-received Texas Flood debut of the year before, among them “Testify,” “Love Struck Baby,” “Texas Flood,” “Lenny,” and “Pride And Joy.” But the bulk of the attention that night was given to the songs on the new album, Couldn’t Stand The Weather, among them “Voodoo Child (Slight Return),” “The Things (That) I Used To Do” “Honey Bee,” “Couldn’t Stand The Weather,” “Cold Shot,” “Tin Pan Alley (aka Roughest Place In Town),” and (for a third time in this package) “Stang’s Swang.”

“A memorial to Stevie Ray stands on Town Lake,” wrote former Governor Richards in her notes to the SRV box set. “It is a statue of Stevie Ray at ease, standing there with his hand on his guitar, facing south. The statue is about eight feet tall – literally larger than life. The size is appropriate because he was a giant to those who heard him.”

Couldn’t Stand The Weather (Legacy Edition) is a newly designed doubledisc package that expands on the original release to include an incredible 16 previously unreleased tracks: disc one offers three newly-discovered studio outtakes; disc two is comprised of the explosive August 17, 1984 live performance of SRV & DT at the Spectrum in Montreal, Canada.

“Day By Day, Night After Night” by Craig Hopkins is about the life of Stevie Ray Vaughan that you have never read before. The book explores where this musical genius came from, how he became successful, what he experienced along the way, the recollections of those who were closest to Stevie, his dramatic recovery from near-fatal addictions, stories from the band’s life on the road and in the studio which is all illustrated in a way that has never been done before and likely never will be again. The book also includes almost one thousand of the most historic and artistic photos of Stevie Ray Vaughan’s life which range from family photos to candid shots while on tour. The book has been published in chronological order so that you may follow in the day by day footsteps of the great Stevie Ray Vaughan on his way to fame. Interviews with Stevie’s family and band members give us a more intimate portrait of the life behind the fame from his alcohol and substance addiction to his tough road to recovery.

Hopkins has composed the ultimate biographical masterpiece of the great Stevie Ray Vaughan. You do not have to be a fan of Stevie to appreciate the genius and creative execution that has been put into this book. Each and every person that has inspired and encouraged Stevie throughout his life, from his family, friends, band mates, business associates and hundreds of fans have all been included into this compilation of Stevie Ray Vaughan’s life. Each book cost $75 and is a limited edition run of only 3200 copies. 1000 of them have been signed by Craig Hopkins and over 50% of the books have already been sold.

Welcome to SRVOFFICIAL.com. The home of Stevie Ray Vaughan and his fans. Welcome and please say hello in the forums!