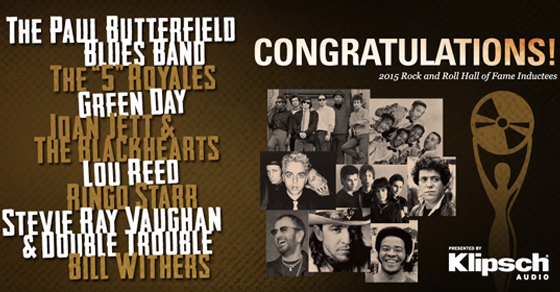 This year’s class also recognizes the “5” Royales with the early influences award, and former Beatle and solo artist Ringo Starr enters the Hall of Fame – the last of the Fab Four to be inducted as a soloist, following John Lennon in 1994, Paul McCartney in 1999 and George Harrison in 2004.

…Leading up to the April 18, 2015 ceremony, the Rock and Roll Hall of Fame will host a series of special events, including the grand opening of the major new 2015 Inductee exhibit.

As in previous years, the 2015 Rock and Roll Hall of Fame performer inductees were chosen by a voting body of more than 700 artists, historians and members of the music industry. To be eligible for nomination, an individual artist or band must have released its first single or album at least 25 years prior to the year of nomination. …Induction ceremony presenters, performers and broadcast information as well as additional details about the week of events leading up the show ceremony will be announced at a later date.

Where: Public Hall in Cleveland, Ohio

Tickets to the 2015 Rock and Roll Hall of Fame Induction Ceremony go on-sale to the public on Thursday, December 18, 2014 beginning at 10 a.m. EST. To purchase tickets, visit www.ticketmaster.com or call 800-745-3000. Individual tickets to the Induction Ceremony are available for $75, $150 and $300. Tickets are expected to sell out quickly. A two-ticket limit applies to all purchases.